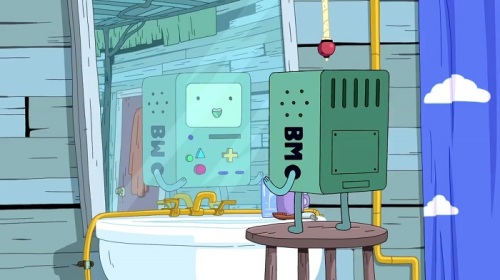 The two-disc DVD and single-disc Blu-ray release of Adventure Time was recently released! Fans both old and new have something to really be excited about with this collection! I’ve heard it said that this season has many fan favorite episodes! This collection features season 4 in its entirety of 26 episodes (286 minutes of goodness) and there’s a lot of great bonus content to be happy about too!

The special features such as the 19-minute Distant Bands: The Music of Adventure Time is truly something to be seen! I think it’s great to learn more about what how the songs were chosen and what elements they thought important to include. I love hearing from creative people on how the whole choice and selection process of what songs chosen was done.  The slipcase cover is neat featuring Marceline and changing from her hair up to down is fun and something collectors will find pretty awesome. My household really likes Adventure Time. My kids are ages almost 4 and 6 1/2 year old and really like the fun adventure and fantasy game like elements. It’s amusing, it’s clever, and though over the top at times all nestled together perfectly. Daring quests, unicorns, Gnomes, ogres, Candy kingdoms, penguins, and interesting worlds… what more could you ask for? We’ve recently been watching back season on Netflix to see what we’ve been missing out on and aiming to start collecting all the season for ourselves. I asked my husband about why he likes Adventure Time. Here’s what he had to say:

It’s hard to do off-the wall story-lines with what seems to be random elements, but Adventure Time has a cohesive world with recurring characters that bind everything together.
This prevents it from being a series of random events that don’t matter.

Relationships grow, change, and make a difference later in the series. The show is mostly an anthology show, and plots don’t tend to continue past the episode, but here and there something that happens in one episode will crop up again in a later one.

Most of all, the show is strange and funny, and strangely funny. to any fan or collector of the series. Though the episodes stand alone well enough I would recommend seeing these from the very beginning too!

This set would make a fabulous gift for anytime but a great choice for a fan during the Holiday season! The suggested retail price of either the Blu-Ray or DVD is $17.99 and $24.99.