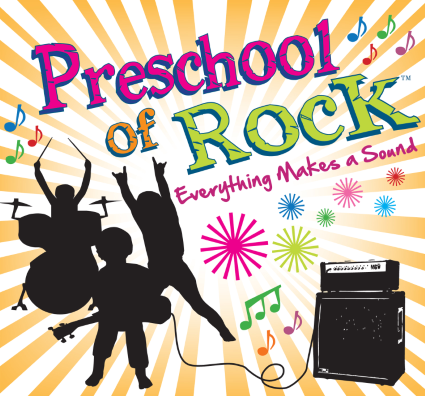 Laying down a beat, from Doo-Wop to Blue Man Group …

Building on the momentum of their 2012 Parents’ Choice winning album, Dance Party, Preschool of Rock charts new kids’ music territory — defining life as rhythm — with the December 4 release of their third studio CD, Everything Makes a Sound!

Everything Makes a Sound features singer/songwriter and multi-instrumentalist Michael Napolitano who, as a second-generation drummer, lives and breathes rhythm. Michael, founder of the popular New Jersey-based Preschool of Rock music classes, is well aware that rhythm, an intrinsic aspect of childhood from patty cake to jumping rope, provides the motor for individual development and a framework for social connections with other kids. On Everything Makes a Sound, he’s included tribal rhythms (“Safari Song”), indie melodic hooks (“Shake It”), and even punk beats (“Cupcake Song”). Michael also wanted to pay tribute to his parents and the importance of family.

My children have been enjoying “Everything Makes a Sound” quite a bit. Though I must say that this album has had a bigger impact on my nearly two year old son over my four and a half year old daughter. He’s literally has been asking for it to be played daily since I introduced them to it. Since his favorite song on the album is “Shake it”, he asks for the album by that name instead of it’s actual title.

There are ten tracks on this album and total runtime is a little over thirty minutes. The specific time has been perfect for a half hour of dance time each day as well as our short trips from and to destinations in the car. Playing music that the kids love during trips whether short or long always boost the spirits of my kids and that makes for a much better trip for everyone in the family.

A few of Owen’s (my nearly two year old) favorite tracks are Shake it, the Safari Song, and the Cupcake Song. I personally love the song Everything Makes a Sound because it’s so unique as everything the song is composed of can be found around the house. I believe the artist of this album is doing a great job in making children learn and appreciate rhythms of all kinds! It’s gotten both my kids moving and singing along to the tracks and for me, that’s a win!

If you are interested in learning more about the album, be sure to check out the Preschool of Rock website at: http://preschoolofrock.com

Buy it: Preschool of Rock “Everything Makes a Sound”, can be purchased for $14.99 on at CDbaby.com and iTunes. This album best suited for children ages birth to age 6 six, in my opinion.

Disclosure: I received the above mentioned products in exchange for my opinion of them. This review is 100% my opinion and has not been edited or reviewed by anyone. I was not compensated in any other way for this product review.