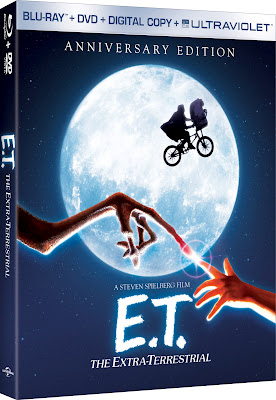 When an imaginative boy meets a lost alien, it is the beginning of one of cinema’s most endearing friendships, as Elliot (Henry Thomas) helps the marvelous creature he calls E.T. find his way back home before government agents can capture him.

If you are a fan of the sci-fi genre as well as classic movies that will truly resonate with you for a lifetime, then there’s a good chance you already knew that on October 9th, E.T. 30th Anniversary Edition Blu-Ray Combo Pack was released! When this movie originally came out, I wasn’t even born yet. I do remember seeing it vaguely around the age 4 or 5 years old. It had been so long since that, seeing it again recently really felt like the first time. My only regret in doing so is that I didn’t opt to see it again sooner.

This movie has a very heartwarming story that will truly move you! I sat down this week with my kids to reach watch a piece of my own history and to share with them a movie that I am sure they’ll continue to share with the generations to come. Both My kids loved the film. My daughter whom is four and half years old was super engaged through the whole thing. Now keep in mind there are some really deep scenes in the movie and to each his own if you think you’d like your kids to see it. Scariest moments in my opinion are near then end of the movie when ET is near to passing from this world ( I was in tears!). Parents, keep in mind this film is rated PG.

Don’t get me wrong, there is lots of fun to be had in this film. It’s completely an adventure from start to finish. There are plenty of laughs, epic bike rides, and much goodness to be had. The musical score is by John Williams, meaning that it is completely epic and I’m already looking into purchasing the soundtrack right now! The Bonus features of this DVD are jam packed. I still haven’t gotten through all of them yet.

Overall, I highly recommend this movie. There’s much good to be said and had over E.T. The Extra-Terrestrial Anniversary Edition. Be warned that you might get the hankering to watch all the Star Wars film movies (lots of references in the film) again. And you’ll also probably want to nab a bag of Reeses Pieces!

Disclaimer: I received a copy of this DVD in order to view it and share my thoughts on it. All opinions are my own.