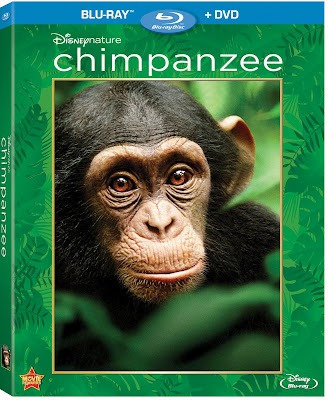 From Disneynature, the studio that brought you “Earth,” “Oceans,” and “African Cats,” comes “Chimpanzee” — a remarkable story of individual triumph and family bonds. Journey deep into the African forest and meet Oscar, an adorable young chimp with an entertaining approach to life. The world is a playground for little Oscar and his fellow young chimps who love creating mayhem. His playful curiosity and zest for discovery showcase the intelligence and ingenuity of some of the most extraordinary personalities in the animal kingdom. Stunning hi-definition images bring you up close and personal as Oscar and his family navigate the complex territory of the forest. It’s an inspiring and life-changing adventure that overflows with courage and charm. And it will capture your heart.

Disney’s Conservation Legacy– This feature provides a look at the conservation efforts that Disney sponsors around the world.

Everything on DVD, plus:

On Location: The Making of Chimpanzee is a series of exciting short features that delve further into the incredible lengths of filmmakers went to tell the story of Oscar and his chimpanzee family.

30 Years in the Making- The story of the team of researchers who have been observing chimpanzees in the Ivory Coast for 30 years.

The Heart of the Chimpanzee– A behind-the-scenes look at how and why the film was made.

Piece of the Puzzle– A cameraman’s two-hour daily trek through the forest to get to the chimpanzees.

Don’t Blame the Tool– An observation of the chimpanzee’s daily lives and how they use rocks as tools to prepare their food.

Scar’s Army– An inside look at the struggles between the film’s two rival chimpanzee groups who share the same forest home.

Camp Invaders– A featurette on all the creepy, crawly creatures found at the filmmakers’ forest camp.

Forest of Bees– A feature detailing how the crew spent two days wading through a sea of bees that inhabited their filming location in order to capture 20 seconds of footage.

Behind the Scenes of “Rise”– An inside look at McClain Sisters music video shoot.

This movie gives viewers a look into the life of a chimpanzee named Oscar.  I honestly was blown away by the story and deeply moved. I would recommend that parents would screen this documentary before they let their younger children watch it. There are some moments that can frighten the younger ones. For instance there are some scary moments such as rival groups fighting,  then there’s hunting and eating another animal. Now nothing to graphic but I do think people should know before showing this to say a five year old. If you do, be prepared to answer and then reassure your child. There are most certainly some deep conversations that will spark after viewing this film.

Tim Allen does a great job narrating this film and the  cinematography is breathtaking.It’s a great film to learn how life in the wild is for Chimpanzees. I would recommend this film to educate and inform those of all ages. Just remember to check it out before your kids!

Buy it: You can purchase Disneynature Chimpanzee (Two-Disc Blu-ray/DVD Combo in DVD Packaging)

for 26.96 on Amazon.com and it’s eligible for free shipping!

Disclaimer: I was sent the above mentioned product to review. This review is 100% my opinion and has not been edited or reviewed by anyone. I was not compensated in any other way for this product review.