***Special thanks to Audra Jennings of the The B&B Media Group for sending me a review copy.*** 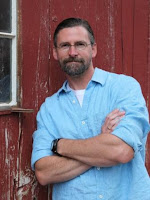 John Blase’s work includes Living the Questions and Living the Letters Bible-study series, the Worldviews reference book (TH1NK), Real Life Stuff for Couples, and The Message Children’s Bible. A former pastor, John currently edits by day and writes by night. He and his wife, Meredith, have three children and make their home in Colorado. 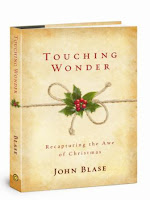 In the sixth month of Elizabeth’s pregnancy, God sent the angel Gabriel to the Galilean village of Nazareth to a virgin engaged to be married to a man descended from David. His name was Joseph, and the virgin’s name, Mary. Upon entering, Gabriel greeted her:

Beautiful inside and out!

God be with you.

She was thoroughly shaken, wondering what was behind a greeting like that. But the angel assured her, “Mary, you have nothing to fear. God has a surprise for you: You will become pregnant and give birth to a son and call his name Jesus.

He will be great,

be called ‘Son of the Highest.’

The Lord God will give him

the throne of his father David;

He will rule Jacob’s house forever—

no end, ever, to his kingdom.”

Mary said to the angel, “But how? I’ve never slept with a man.”

The Holy Spirit will come upon you,

the power of the Highest hover over you;

Therefore, the child you bring to birth

will be called Holy, Son of God.

“And did you know that your cousin Elizabeth conceived a son, old as she is? Everyone called her barren, and here she is six months pregnant! Nothing, you see, is impossible with God.”

Let it be with me

just as you say.

Then the angel left her.

The theologians have rendered us mindless God-slaves, wisps of cloudy wings, doing nothing but the bidding of the Mighty One. Theologians. There is so much they do not know.

I found her just as He said she would be found: sitting on her bedding, barefooted, knees pulled up to her chest, arms wrapped tightly around them, chin resting on her knee-tops. I saw why she had gained the favor of the Mighty One. I liked this daughter-of-Eve-to-bethe-mother-of-God.

I expected this. But unlike that old priest’s, hers was not the doubting of a skeptic but rather the wondering of a child.

“The Holy Spirit will come upon you, the power of the Highest hover over you. Mary, you have nothing to fear.” The Mighty One had expressly said, “Herald the news, Gabriel. Don’t report it.” I would have liked to elaborate further, but Mary would have to live out the details of my news in days to come. Truths unlived are not truths.

Then she paused and looked away. I have spoken to many of God’s children, and their eyes are always transfixed on me. They should be. I am Gabriel, the sentinel of God. But Mary’s gaze wandered for a moment. But what I initially took for a distracted mind was rather a devoted heart.

Her eyes returned to me. “Let it be with me.” Ah, the Mighty One had chosen well. Her words were not

resigned, but faith-full. The faith of a child. Of such is the Mighty One’s kingdom.

“Nothing, you see, is impossible with God. Mary, you have nothing to fear. I have told you all you need to know for now. You are more ready than you realize, stronger than you know. God is with you. Now I must go.”

But I did not want to go. Faith is rare, at least true faith. Yes, the word is often used, but the reality is hard

to find. Yet here I found it, in an earthen vessel surrounded by an earthen room. I liked Mary.

I left her just as He said I would: barefooted, sitting on her bedding, knees pulled up to her chest, arms

wrapped tightly around them, chin resting on her kneetops. She looked older now. Human eyes would not

recognize this, but mine have seen much.

The Mighty One had revealed glimpses to me, what days ahead would hold for this glorious girl. Her cousin’s leaping womb. Joseph’s broad shoulders. The back of a borrowed burro. Herod’s jealous-red face. The cries of the innocent. The breath of stable animals. The agony of pushing the Mighty One out into this world.

I found myself praying for the favored one. Mary had so much to carry.

©2009 Cook Communications Ministries. Touching Wonder by John Blase. Used with permission. May not be further reproduced. All rights reserved.