The Missionary- A Novel 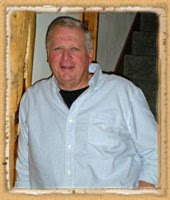 William Carmichael is an accomplished bestselling author of marriage, family, and parenting books. He and his wife, Nancie, are popular speakers across the United States and Canada. He is also the founder of Good Family Magazines, which published Virtue, Christian Parenting Today, and Parents of Teenagers magazines. The Missionary is Bill’s first novel. 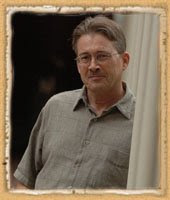 David Lambert is senior fiction editor for Howard Books, a division of Simon & Schuster. He is the author of nine books, including the Gold Medallion Award winning Jumper Fables (Zondervan), coauthored with Ken Davis, and four novels for young adult readers.

The tall man guided his new Mercedes out of Avenue Casanova traffic and pulled in behind a battered Volks -wagen at the gutter; he had just seen the Ford van several cars ahead of him pull over, its emergency flashers on. He leaned to the side, straining for a clear view around the cars and trucks honking, jockeying for position, crowding the avenue. It was late—10:34, he affirmed with a glance at his Rolex—and the glare of so many lights on the rainwashed streets made him squint. He watched the van’s driver get out, wait for a break in the traffic, and then jog across the street toward some sort of commotion. There were children running—one was on the ground, a boy. A heavyset man in a dirty white apron was yelling at the fallen boy, kicking him, and the boy curled into a ball. A girl threw herself between the fallen boy and the man; the man pushed her down. The van’s driver arrived and held up a hand, yelling at the man in the apron, who yelled back.

There was nothing unusual about the scene. It was played out scores of times on this and many other Caracas streets every night: hungry, homeless children scrabbling for a living, treated as nothing more than human refuse by the adults annoyed by them or who sought them for other purposes. One needed no more excuse to kick—or exploit, in any of dozens of unsavory ways—a street urchin than one did a stray dog.

The tall man had seen the driver of the van, a missionary, make several such stops over the past few days, usually at night, chatting with groups of these children, teasing them, making them laugh, talking to them as long as the children were willing to stay. Twice the tall man had managed to get close enough to overhear the missionary asking kids where they lived, whether they had enough to eat, whether any of them were sick or knew other children who were sick, whether there were other homeless children nearby. The name on the side of the van was Aldea Esperanza. Hope Village. The tall man knew exactly where it was; he had driven past it, slowly. It was a mission—a place that took in young homeless ones.

Three or four other children wandered back as the aproned man disappeared. If any of these children had a home with a bed, they would undoubtedly have been in it by this time of night.

A group of young men walked by, their clothes and voices loud, two of them taking swigs from their bottles of beer. The avenue was crowded with those seeking thrills, as well as the homeless. From across the street, a prostitute caught the tall man’s eye and waved. He ignored her. Peering around a passing truck, he watched as the missionary knelt and placed his hand on the forehead of the young boy.

This was a good thing that the missionary was doing. The tall man admired him for it. Yes, it was time to meet him face-to-face. Maybe he was the right man for the job. Maybe not.

The rain had stopped, at least for now.

David glanced up at the girl who had tried to protect the boy; she could not have been more than ten.

“He is my little brother. He started coughing five days ago,” she said. “And after he runs, he cannot breathe.”

”Ricardo. My name is Angela.”

David smiled and touched her arm. “Angela, where are your parents?”

Angela shrugged. David saw this response often. It meant that the girl’s parents were drug addicts, or that they were dead, or that she had no idea where they were and probably hadn’t seen them in some time.

He brushed Ricardo’s lank hair from his forehead. For five years now David had patrolled the barrios of Caracas, witnessing the misery of an endless supply of impoverished and sickly and homeless children. Was there no end to the suffering here?

Swarms of Latinos hurried by in the warm, humid night, seemingly unaware. Salsa music blared from one of the bars down the street. Honking cars, trucks, and buses jammed Avenue Casanova. The stink of urine rose from the gutter, a bitter note blending with the fragrance of fresh arepas, frying chilies, refried beans, and beer. “¡Vámanos, arriba!” someone yelled from down the street.

Ricardo stared at David with sunken, panicked eyes, his back rising off the broken sidewalk in his effort to pull air into his lungs.

“How old is your brother?” David asked Angela.

There was no point calling an ambulance. They refused to pick up the homeless. David pulled out his cell and called his wife. “Christie, call Dr. Vargas and see if he can meet us at the clinic in forty-five minutes. Tell him I have a seven year-old boy I think is in the acute stages of pneumonia. He can barely breathe.”

There was a pause. “Is he wheezing?” she asked.

“Okay. Get him here quick.”

When David clicked off his phone and reached behind the boy to lift him, large olive-skinned hands reached down to help. David looked up to see a tall, well-dressed man.

“Can I please help you?” The stranger spoke in English.

“We can put him in my car just down the street if you need transportation to the hospital.”

“Thank you,” David said, “but my van’s right here.” He nodded toward the white nine-passenger Ford van he used as both bus and ambulance. It was double-parked, emergency flashers blinking, Aldea Esperanza painted in bright red letters on the side. “I’m taking this child to my clinic.”

Before David could object, the tall man lifted Ricardo’s thin little body into his arms and headed for the van. David grabbed Angela’s hand and, weaving through honking, halting traffic, hurried ahead to open the back doors. Inside lay a mattress neatly wrapped with clean white sheets. The man gently laid Ricardo on the mattress.

David motioned for Angela to climb into the back of the van with Ricardo. She hesitated. “What about my friends? Two of them are also coughing.”

David looked back across the street, where seven children stood watching. He glanced at the well-dressed man, who shrugged.

“We don’t have room,” David said. “I’m sorry. Right now, I can only take your brother and you. And for your brother’s sake, we must hurry.”

“Then take Maria instead of me. She has been coughing for three days,” Angela replied.

David looked at the stranger, then across the street again. “Jesus, help . . .” he whispered, then asked, “Which one is Maria?”

Angela yelled, “¡Maria, ven!” motioning Maria forward. A girl David guessed to be about the same age as Angela wove her way through traffic toward them. Without asking, Angela quickly shoved Maria up into the back of the van next to her brother.

Always choices, David thought, and most of them are bad. How can it be the will of God to simply choose among the least bad alternatives?

He put his hand on Angela’s shoulder, urging her into the van with Ricardo and Maria. As she scrambled in, she smiled. Already a skilled negotiator, David thought. David shook the stranger’s hand and hurried to the driver’s door. “Thank you for your help.” He grabbed a business

card from the dash and handed it to the man, then cranked the engine and slammed the door. “Why don’t you visit us?” he hollered through the window, over the engine noise.

David waved over his shoulder and inched out into traffic, his headlights reflecting on slick, wet streets. Ricardo hacked a loud, racking cough.

David took a sharp right, leaving the business district and entering a darker, less congested area, a faster way home. Big raindrops began again, slowly at first, then pounding hard and fast against the windshield while the wipers beat like rapid rubber drumsticks. And there was another sound. At first David thought that the windshield wipers were broken—the motor giving out, wheezing . . . and then he realized that the sound was coming from the back of the van. It stopped. David glanced in the rearview mirror.

The boy’s sister hovered over Ricardo. “Angela, how’s your brother back there?” David asked. “Everything okay?”

“Señor!” she said. “He cannot breathe! He is choking!”

This is quite the action packed book, trust me when I say you’ll have trouble putting this one down! What makes this book such a read is not only is the storyline awesome but character development was top dollar! It’s been awhile since I’ve been drawn so deeply into a book!  I highly appreciate Carmichael & Lambert’s job well done. I’ll most assuredly be looking for more titles by the duo!