The Diversity Culture: Creating Conversations of Faith with Buddhist Baristas, Agnostic Students, Aging Hipsters, Political Activists & Everyone in Between

Matthew Raley is senior pastor of the Orland Evangelical Free Church in Northern California, where he lives with his wife and two young children. He is also the author of the fiction book, Fallen. 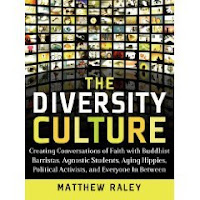 A woman rolled over and reached, but remembered that her new friend had already left. She sat up, staring at the impression he had made on her bed. At least he had his own life.

Past cold candles she shuffled to her bathroom, the air inside still fragrant, condensation still clinging to the window after his shower. He would be wearing that Huntsman suit made for him last time he was in London—the suit he wore when she first saw him two weeks ago at Davies Symphony Hall. And maybe the same tie from Arnys. When you’re on a team preparing to argue before the Ninth Circuit you don’t wear your beloved tie-dye and jeans—even on Columbus Day.

The woman was annoyed that her new client had insisted on meeting. Even though the holiday is totally imperialist, she wished that she didn’t have to get into business mode, and she was bored by the prospect of yet another menu-design. Still, the meeting wasn’t until early afternoon, so she lingered over her makeup.

The TV remote called from the kitchen counter to her pre-election obsessions. She switched on MSNBC and caught the headlines. Weekend poll shows Obama up seven.1 Cool. Europeans try to keep their banks from collapsing. Not cool.

She poured coffee out of the French press and held the mug under her nose while she scanned the San Francisco Chronicle. Predictions that the financial collapse will stall climate change initiatives, anxious summary of the economic developments over the weekend, analysis of McCain and Obama avoiding the immigration issue.2

After the computer finished clicking and sighing, she checked how much e-mail had piled up over the weekend. Amid the flurry of personal messages were two articles from the New York Times. One friend had bragging rights, a mention of the bookstore where he worked, City Lights, in a travel article on Buddhist attractions in San Francisco.3 Another friend was gloating over Sarah Palin’s splitting right-wingers, forwarding a column by David Brooks that dissed the Alaskan governor.4 The friend wrote, “McSame’s going down! You betcha!”

The woman opened a cupboard. Froot Loops! It was very cute. Her new friend had gone out this morning and brought back Froot Loops and put Toucan Sam just inside the cupboard smiling down his beak at her. She loved a guy who could keep an inside joke going. All weekend bumming around Half Moon Bay it had been, “Follow my nose! It always knows!”

But if he went any further with it, she’d get annoyed.

Attired in the black trousers and narrow-shouldered jacket she found in Milan, her funky boots that clopped on her wide floorboards, and a low-cut, fitted T-shirt, she strode out of her loft into the fog, down to her Outback.

At this hour, the drive along I-80 and across the Bay Bridge into the City would not be enraging but still long. That was why they had KQED. “Talk of the Nation” was all about lynching—“How Far Have We Come?” Ted Koppel was talking about his new documentary on the subject, and a congressman described his experiences as an 18-year-old Freedom Rider in Mississippi.5 Mississippi, where they still believe the Bible’s commands to hate and kill people. The woman glanced at a billboard against the proposition banning gay marriage. We haven’t come all that far, have we. Still fighting hate.

She parked, slung her large leather portfolio over her shoulder, and walked to Café Siddhartha around the corner from her studio—as if she needed more caffeine. What she wanted was the aura of the place, the energy. It was like stepping into one of the temples where she’d meditated in Tibet. The walls were floor-to-ceiling saffron. Deep chimes spoke, and the Buddha laughed. The café had an authenticity she needed—in spite of the hissing espresso machine.

The woman took her mocha and turned to the seating area thronged with people. There was only one chair at a common table—right next to . . . whoever this was.

Well, she knew exactly who he was: he was her mental picture of a Mississippi bigot. He was fat, his face all soft and oily. He wore this dark blue cardboard suit with the jacket buttoned over his paunch. And where could he have gotten it? And when? It could only have been Penny’s, circa 1995, what with the wide lapels and sloping shoulders. This he had mated with a white shirt and skinny red tie—1984, Nancy Reagan red. And the pre-folded, matching pocket square.

His hair was Grecian Formula black, parted on the right by a razor blade and swirled above his forehead, apparently under thermonuclear heat.

He was reading a book by—no, surely not. It couldn’t have been Nixon’s Chuck Colson. But it was: his picture was on the back.

How was she to bask in the Tibetan aura sitting next to a Baptist? He reminded her of the imported southerner her parents’ church hired in 1979 when she was in high school—Mississippi in the San Joaquin valley. Had he gotten lost passing out tracts at Pier 39? Really lost?

Many evangelicals fear this woman.

They don’t know what to do with her hostility: confront, mock, soothe? There’s no soothing an attitude so visceral. Confronting it is asking for hostility times ten. That leaves mockery—the talk radio mode most evangelicals have learned by now—which fire-bombs whatever bridge there might’ve been.

But the fear goes deeper. Many evangelicals sense the woman’s hostility is the least of their problems.

Evangelicals in America have a distinct subculture. They tend to worship in churches with conservative political and theological views. The strongest bases of evangelicalism are in suburbia, and the movement is disproportionately white and middle class. Evangelicals have their own media, reading different books and magazines than secular people, visiting different Web sites, listening to Christian music and radio, and often watching Christian TV stations and movies.6

The woman, many evangelicals feel, has built a life in which they have no place. She didn’t just stop going to church after escaping her parents; she moved to the big city and changed identities. Her adopted ways were a point-by-point rebuke to her inheritance—not small-town or suburban, but urban; not Western but Eastern; not Christian but New Age; not monogamous but liberated.

I believe the woman now lives in her own distinct culture, one that is full of paradox.

While her culture is often urban, it thrives just as powerfully in Boulder as in San Francisco. The culture is often highly educated and artistic, embracing the preacher’s daughter who came out as a lesbian, went to Reed College in Portland, and became a visual artist. But it also belongs to the straight, blue-collar guy who, despite never finishing college, does well painting houses in Fresno, the guy whose history is unclear—the salt of the earth, but with a ponytail. While this culture is hostile to America’s vast consumer society, rejecting mass-production aesthetics and corporate values, its adherents have well-tended investment portfolios and are influential in the business world, nurturing such successes as Ben & Jerry’s and Starbucks. Yet Starbucks both appeals to and repels them (which is why our woman supports the independent café rather than hanging out at the chain). Politically the culture is blue: antiwar, environmentalist, pro–gay marriage, secular. But it consistently seeks to preserve local traditions.

This culture cries for a label. It needs to be distinguished from the consumer society, but a tag remains elusive. David Brooks calls it Bobo, “bourgeois bohemian.” Bill O’Reilly calls it “secular progressive.” Rush Limbaugh calls it “liberal wacko.”

I call it the diversity culture, after its top priority. Café Siddhartha is about a convergence of influences, insights into life that come from exploration, openness, and freedom. The worst evil to the diversity culture is bigotry. Every shelter for narrow thinking must be eroded by fresh winds.

The Diversity Culture: The dominant American ethos of openness toward all beliefs and spiritual traditions.

Most evangelicals have difficulty penetrating this culture’s ways, and seem to feel it was designed to exclude them. They feel the sting every time the woman talks about bigotry, not knowing whether to embrace the label or fight it. Multicultural talk is not merely irritating to them, but is insulting: “Diversity means every culture but ours.” So the rise of the diversity culture, especially when it wins elections as it did in 2008 with the triumph of Barack Obama, fills them with fear—the fear of having to interact with someone who looks down on them.

Evangelicals as a group feel they don’t belong in Café Siddhartha.

The barriers between the diversity culture and evangelicals are real. The hostility is not a misunderstanding, and the roots of it are often deep in the soil of family. The issues that have fed the hostility are consequential: disagreements about spirituality, cultural principles, history, politics, and the nature of free society. Mere dialogue will not make the hostility wither.

But evangelical fear can be dispelled—and must be.

Fear sabotages interactions with the woman of Café Siddhartha through pride, contempt, suspicion, and cynicism. Evangelicals’ inferior status in the diversity culture’s pecking order is often just as significant as the eclipse of their principles in provoking these emotions. They often react to Subaru Outbacks and the New York Times. Fear and its comrades can make evangelicals petty.

The evangelical sense of calling in America needs to be refocused, which cannot be done wisely by reacting against the diversity culture in fear. The evangelical mission should be defined by God’s call in Scripture.

Fear of the diversity culture is not just a barrier to interacting with those outside evangelicalism, but even with some inside. The fear can be a generational marker: young believers, coming of age under the dominance of diversity, often do not identify with older believers’ suspicions. Truth be told, many young believers view the Baptist at Café Siddhartha from the same cultural point of view as the woman—fairly or unfairly. But they also sense that their heritage is a vital part of their calling to influence their secularized peers, and they desire wisdom from their elders about how to display Jesus Christ to a culture that will not acknowledge the category of Truth. Can older Christians impart that wisdom if they are fearful of interacting with Café Siddhartha?

There is an even more fundamental problem with evangelical fear. Amid similar conflicts, there was no such fear in Jesus.