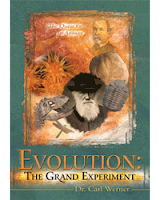 The Origin of Life:

What Are We to Believe?

How did life begin? One view is that an all-powerful God created the universe and all forms of life. Another view proposes that the universe began billions of years ago as a result of the big bang. Later, life in the form of a bacterium-like organism arose spontaneously from a mixture of chemicals. Subsequently, this single-cell organism slowly began to evolve into all modern life forms. A third view is that life evolved, but God formed the first living organism and then helped the process along.

The Origin of Life

How life came about has been the subject of debate for almost as long as mankind has existed. Did life originate as a result of the intervention by a supernatural deity? Or did life come about as a result of natural laws acting over time? Scientists continue to search for definitive answers to these questions.

The publication of Darwin’s theory of evolution in 1859 was a significant catalyst in propelling man’s search for a natural understanding of past and present life. Unraveling the mystery of how life began and how life may have changed over time has been the focus of many scientists. Since Darwin’s theory first made public, scientists have collected over 200 million fossils, described the structure of DNA, and identified how genes are passed on to the next generation. These major scientific developments provide us with relevant and thought-provoking information. They lead us to pause and examine our ideas in view of today’s ever-increasing and heated debate over the history of life on earth.

The purpose of this book is to address these important scientific discoveries and present the reader with rare and remarkable facts concerning the origin of life — from spontaneous generation, through Darwin’s ideas on evolution, to the present-day understanding of mutations and natural selection

Americans Are Split on Their Beliefs.

According to a Gallup poll taken in 2006, many Americans believe that God created man in the last 10,000 years. This is surprising given the fact that scientists have been teaching evolution for more than a century.

What do you think?

Do You Believe in Evolution?

“No, I don’t believe in evolution at all. I think if you just look at the facts, it’s pretty clear, it just can’t be.”

“Did we come from monkeys? I don’t know. There is evidence for it, but there is also some stuff missing, so making that leap with a missing link there, I have some problems with that.”

“From what I’ve seen and heard, we have not evolved from apes for the simple fact that apes are still around. I mean, if we evolved from them, why are they still here?”

“Yes, I do believe in the theory of evolution because I think that we had to come from some place and you know from ape to man to what we are today. I definitely believe in evolution.”

“I think it’s a very sad thing that we’re getting religious views mixed up with governmental involvement with education. I think it’s a sad comment on how people are trying to fix what they see as social problems in today’s world by falling back on religious dogma.”

Ever since Darwin’s time there have been scientists who strongly disagree with the theory of evolution. But since the middle of the twentieth century, there have been a growing number of scientists who reject the theory of evolution based on the discovery of processes and structures of which Darwin was unaware. These scientists cite multiple “lines of evidence” that evolution did not occur, including gaps in the fossil record, problems with the big bang theory, the amazing complexity of even the simplest organisms, and the inability of scientist to explain the origin of life using natural laws.

Scientists who support evolution state that the evidence for the theory is clear and overwhelming. They offer observations of natural selection in action, the evolution of birds from dinosaurs, the evolution of man from apes, as some of the most convincing proofs for evolution.

Con: “Life could not have created itself. Theories on the origin of life, that is the evolutionary origin of life, are modern-day fantasies; they are fairy tales.” – Dr. Duane Gish, Biochemist, Institute for Creation Research.

Pro: “You really have to be blind or three days dead not to see the transitions among these. You have to not want to see it.” – Dr. Kevin Padian, Paleontologist, University of California, Berkeley.

There are different reasons parents want both theories taught to their children. Some refer to a sense of fairness. They want their children to learn both sides of the issue and then decide for themselves.

The problem of how to teach students such a controversial topic is challenging for educators. Some fear that teaching two opposing theories would confuse the students while some believe this approach would encourage students to think critically and openly about the world around them. Others believe that creation is a religious idea and should not be taught in government schools.

What Should Be Taught?

“I believe it is good for students to get a balance of both sides so that they can make up their minds for themselves without being forced into one way or another. I know that if I went to school and they taught all evolution, that I would feel somehow a little gypped.”

“I really don’t have a problem with evolution being taught in the schools just so long as all the information is given and it is shown that it is not quite fact. And it needs to be very scientific in its presentation as far as listing its faults and its strengths. I think that science that only lists strengths, and not weaknesses, in not science at all.”